You are using an outdated browser. Please upgrade your browser to improve your experience and security.
Gridiron football
sport
Media
Print
Please select which sections you would like to print:
Thank you for your feedback

Gridiron football, version of the sport of football so named for the vertical yard lines marking the rectangular field. Gridiron football evolved from English rugby and soccer (association football); it differs from soccer chiefly in allowing players to touch, throw, and carry the ball with their hands, and it differs from rugby in allowing each side to control the ball in alternating possessions. The sport, played with 11 on each side, originated in North America, primarily in the United States, where it eventually became the country’s leading spectator sport. It also developed simultaneously in Canada, where it evolved into a 12-man game, though it never achieved the great popularity and status of ice hockey there. Gridiron football has not been taken up in the rest of the world to the same degree as other American sports such as basketball and baseball. Since the 1980s, however, primarily through the marketing efforts of the National Football League, teams and leagues have been established in Europe, and the game has achieved a degree of international popularity through television. 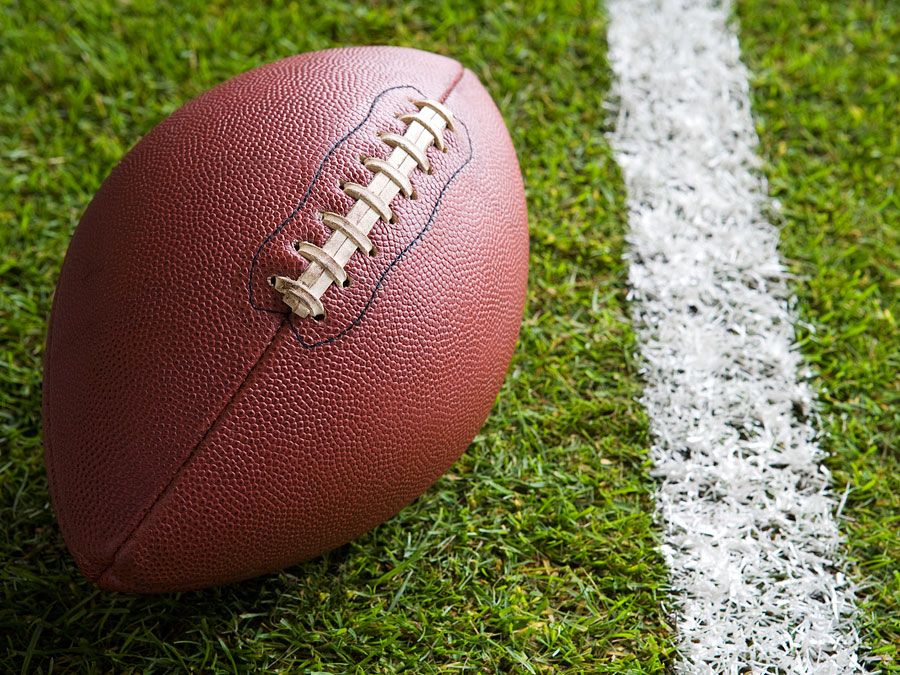 Football in the United States

Roots in soccer and rugby

Gridiron football was the creation of elite American universities, a fact that has shaped its distinctive role in American culture and life. After several decades of informal, student-organized games that were tolerated by faculty as an alternative to more destructive rowdiness, the first intercollegiate football game was played on November 6, 1869, in New Brunswick, New Jersey, between in-state rivals Princeton and Rutgers according to rules adapted from those of the London Football Association. This soccer-style game became the dominant form as Columbia, Cornell, Yale, and a few other colleges in the Northeast took up the sport in the early 1870s, and in 1873 representatives from Princeton, Yale, and Rutgers met in New York City to found the Intercollegiate Football Association and to adopt a common code. Conspicuously missing was Harvard, the country’s premier university, whose team insisted on playing the so-called “Boston Game,” a cross between soccer and rugby. In May 1874, in the second of two matches with McGill University of Montreal (the first was played by the rules of the Boston Game), Harvard’s players were introduced to the rugby game and immediately preferred it to their own. The following year, for Harvard’s first football contest with Yale, representatives of the two schools agreed on “concessionary rules” that were chiefly Harvard’s. When spectators (including Princeton students) as well as Yale players saw the advantages of the rugby style, the stage was set for a meeting in 1876 of representatives from Harvard, Yale, Princeton, and Columbia to form a new Intercollegiate Football Association based on rugby rules.

Walter Camp and the creation of American football

Harvard made the first breach in rugby rules. Rejecting the traditional manner of putting the ball in play—players from both teams massed about the ball in a “scrummage,” or “scrum,” trying to kick it forward through the mass of players—Harvard opted for “heeling it out,” or kicking the ball backward to a teammate. The further transformation of English rugby into American football came chiefly through the efforts of Walter Camp, who even during his lifetime was known as the “Father of American Football.” As an undergraduate and then a medical student at Yale, Camp played football from 1876 through 1881, but—more important—beginning in 1878, he dominated the rules committee for nearly three crucial decades. Two of Camp’s revisions in particular effectively created the gridiron game. The first, in 1880, further refined Harvard’s initial innovation, abolishing the scrummage altogether in favour of a scrimmage, which awarded possession of the ball to one of the two teams. It was then put in play by heeling it out. (Snapping the ball with the hand became legal in 1890, though snapping with the foot continued as an option until 1913.) The second crucial rule change was necessitated by the first. Camp’s more orderly manner of initiating play did not require the team in possession of the ball to give it up. After Princeton simply held the ball for an entire half in its 1880 and 1881 contests with Yale, both games ending in scoreless ties that bored spectators as much as they frustrated Yale’s players, Camp proposed a rule that a team must advance the ball 5 yards or lose 10 in three downs (plays), or it would be obliged to surrender the ball to the other side. Camp was also responsible for having 11 players on a side, for devising a new scoring system in 1883 with two points for a touchdown, four points for the goal after a touchdown, and five points for a field goal (a field goal became worth three points in 1909, a touchdown six points in 1912), for creating the quarterback position, for marking the field with stripes, and for proposing several other innovations, but it was those two simple rules adopted in 1880 and 1882 that most fundamentally created American football.

After the crucial rule changes, the play of the game was relatively open, featuring long runs and numerous lateral passes, as in rugby. In 1888 Camp proposed that tackling below the waist be legalized, in order to offset the advantage of speedy backs streaking around the ends. The new rule resulted in the rise of mass plays, an offensive strategy that massed players on a single point of the defense, most famously in Harvard’s “flying wedge” in 1892. This style of play proved so brutal that the game was nearly abolished in the 1890s and early 1900s.